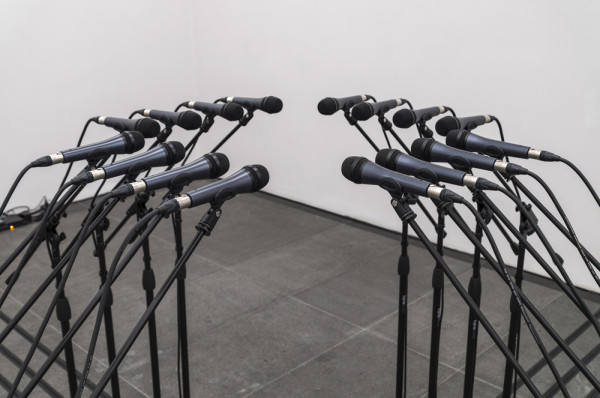 ‘More than colors and forms, it is sounds and their arrangements that fashion societies,’ wrote economist and scholar Jacques Attali. ‘With noise is born disorder and its opposite: the world. With music is born power and its opposite: subversion.’ Artist Naama Tsabar uses sound to expose and subvert the various social and economic relationships at play in arts venues, the music industry and other cultural spheres. Her current exhibition at Paramo Gallery in Guadalajara, ‘Transitions’, uses interactive musical instruments to reflect on human sociality and behavior.

In recent years, the increasing commercialization of music has been fervently criticized; yet it took centuries for music to become an exchangeable commodity. The medieval minstrel lived itinerantly as the embodiment of music, its circulation entirely dependent on his performances. For her current exhibition – in a young commercial gallery in the emerging Mexican art market – Tsabar ties the two ends of this economic history together, melding the performative body with the commodified art object. In Transition (2015), a new body of wall-based works from which the exhibition takes its title, the coloured wires from four deconstructed guitar amplifiers and stage monitors have been pulled across canvases to form abstract linear compositions, punctuated and rerouted by knobs and cable sockets. Cables extending from the blacks of the canvases draw out electrical circuits and blueprints for musical exchanges on the floor, where they also provide power to Barricade (2016), a quadrangular enclosure of 16 vocal microphones on stands, pointing inward expectantly. Heavy rectangular felt sheets hang on the adjacent walls, pulled upwards into elegant curves by taught piano strings tied to guitar tuning pegs. Although Tsabar provides no instructions for how to play these idiosyncratic instruments, they are designed to be strummed or stroked by viewers. When they reverberate against their felt backings, the strings produce unpredictable, irregular harmonies. Drawing on art historical influences such as Joseph Beuys’s felt sculptures or Robert Morris’s cut-felt wall pieces, the material here subverts expectations: no longer the dampener of sound, but the resonating chamber itself. As the instruments are played, the body determines the texture of sound as much a tuning peg or string. For the exhibition’s opening, Tsabar invited four local musicians to play the sculptures while Brooklyn-based vocal artist Fielded sang before Barricade’s cadre of microphones; as they performed, their bodies became an essential material in the exhibition. Together these pieces orchestrate an ensemble of relationships, not just spatially and sonically, but socially as well, as viewers move through the gallery’s acoustic landscape, free to play the works as they wish.

On his now famous visit to the anechoic chamber at Harvard University, John Cage heard two sounds in the silencing vacuum – one high (his nervous system) and one low (his blood circulating) – leading him to proclaim that there is no such thing as truly silent space. Before they are played, the works’ quiet stillness amplifies their anticipatory effect. By encouraging visitors to defy gallery protocol and touch the art, and forcing them to grapple with the embarrassment of performing in front of strangers, the exhibition highlights the awkward social dynamics of overly formal ‘white cube’ gallery spaces. Obscuring the distinctions between artist, gallerist, performer and visitor, Tsabar demonstrates the power of sound to bring people together.