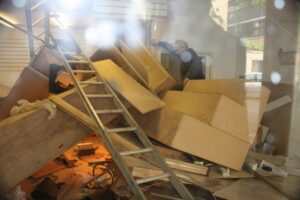 In May 2010, the UK general elections exemplified the widespread uncertainty of the country. The confusion and unease that followed in five days of coalition talks resulted in what was widely perceived as an awkward, shambolic and compromised coalition government. Next Door (the missing subject) presents a major new film work and a series of photographic stills of Stuart Brisley’s performative response over a ten-day period during the month of these elections. Taking up temporary residence in the disused shop next to PEER, Brisley adopted the persona of Rosse Yael Sirb, the Curator of his renowned Museum of Ordure. Constructing, disassembling and rearranging the accumulated detritus, abandoned materials, tools and shop fittings into a precarious, fluctuating heap in the middle of the space, the film captures him as he clambers about the perilous structure with almost perverse seriousness. A portrait of the queen propped against the wall falls, glass smashing among the debris. Brisley’s activity, at once destructive and productive, reflects his dissatisfaction of debates on constitutional reform and the futility of the reshuffling of the stagnant political system.

Within a wider context, the masses have responded to the exigency of political matters across the globe through direct action. Perhaps performance is the only art form that can truly respond to the political climate with the same urgency, and Stuart Brisley, enfant terrible of the art world since the 1960s, is well versed in the portrayal of the collapse of political structures. Brisley’s performances, which often involve intense physical activity over prolonged periods, are renowned for their mordant reflection of the conflict between human autonomy and the instrumental forces of bureaucratic and state power. In Next Door (the missing subject), the presentation of performance documentation as artwork acts to scrutinize the role of action as political statement and its legacy as political commentary.

The film captures the first hand audience of the performance, both passersby peering through the shop window and art audience observing through a viewing hole cut in the wall to the gallery next door. And now, almost two years on, we are privileged with a third vantage point; with the perspective of hindsight. Watching the film in the now clean empty room, transformed into PEER’s expanded gallery space, the performance is re-presented, edited down to thirty minutes from hundreds of hours of footage. Rather than attempt an objective documentary, the film embraces its role as preserver of a historical moment and commentator for a future audience, aware of the subjectivity involved in the writing of historical narrative. The film’s steady shots, surveillent slow pans and abstract close-ups demand an authority over the chaotic mise-en-scene.

Whilst Brisley, or rather R. Y. Sirb, is captured within the frame, authorship of the film is no doubt that of the artist, filmed from the perspective of the experience of taking part in the action, shot within the confines of the shop. The photographs tell another version of the same story, documenting the work from outside the shop through the eye of the audience, the world reflected on the glass of the window, exemplify the performance as a microcosm of wider global conditions.

Although only a stone’s throw from the bustle of Shoreditch visiting PEER, in a modest retail unit between a local post office and residential blocks, feels off the beaten track. The location however enhances reflection of the exhibition subject in relation to the local, everyday impact of politics rather than grander metanarratives. Unlike the reactive protests, uprisings and riots of the past year, Brisley’s work quietly contemplates its contribution to a wider growing culture of questioning and considered interrogation. Texts of the artist’s daily thoughts, originally exhibited as bulletins during the performance, have been reproduced in a booklet. Here reminded of the Conservative Party’s election slogan, ‘The Broken Society’, we are inevitably prompted to consider how much conditions have really moved forward. Next Door (the missing subject) reflects not only on the moment of the British elections in 2010, but how recent history is recorded, interpreted and remembered. By doing so Brisley encourages us to take the time to review, rework and reassess our creative responses to history as it unfolds before us.