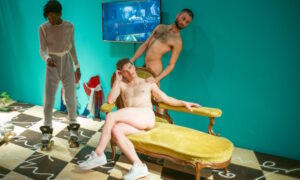 Often appearing in his own work, clothed or otherwise (indeed he appears naked on the cover of the exhibition catalogue), the merging of ‘art’ and ‘life’ is core to Peake’s creations. I first encountered his diverse output at a dank Dalston basement club night: pertinently named Anal House Meltdown – a collaboration between Peake, Prem Sahib and George Henry Longly – the trio govern a night filled with half-naked sweaty bodies and limbs orgiastically intertwined. Peake entrenches his work in queer culture’s aims to overturn the definitions of both sexuality and high/low culture, The Forever Loop continues this all-encompassing pursuit, rehashing past works and melding personal influences. A frenzied nostalgia for everything 1990s is apparent, with mirrored paintings, florescent jagged graffiti text, pirate radio, brightly coloured acrylic bears, sensuous mobius sculptures and metallic whale vertebrae all vying for attention. Interweaving these frenetic environments, a video, playing simultaneously on multiple screens, flits from footage of past choreographic performances, a home video from his childhood, a film shot at the studio of Kool FM (the London-based hardcore jungle pirate radio) and animated bendy cartoon cut-out figures from the music video he produced for Gwilym Gold’s track ‘Flex’. Gouged holes in the angular architectural maze construction create frames within frames, while a raised scaffold walkway provides alternative vantage points to view the works below. A scrawled text spans the 90-metre curved wall and leads would-be readers back to the entrance in order to follow its narrative – one of the work’s many loops.

In previous works, Peake has used the image of the mythical god Pan, half-human half-goat, as an emblem of the fluidity, ambiguity and changeable nature of identity and subsequent shortfalls of categorisation. Here, a glamorous roller-skating trans-woman segues between the fragmentary syntagm of the various media – video, painting, sculpture, installation, performance. Implicating and activating the viewer within this expanded narrative, Peake reveals the exhibition to be ‘like a sentence that you can never read at once’.

Across visual cultures, the strategic pursuit for an evermore ‘haptic gaze’ has seen a collapsing distance between spectator and image, heightening sensations. The Forever Loop speaks to a condition, foreseen by Félix Guattari in the early 1990s, where the dominance of mass-media channels has given way to an emancipated era of collective-individual appropriation and exponential interconnectivities. True of the sex and pornography industry too, the interactive sexual fantasy of strip clubs has transferred to the computer screen; cam-girls and boys now sit conveniently beside internet tabs of Facebook selfies. With this ‘post-media condition’ as backdrop, Peake unpacks the emotive and lustful experience of the flesh. The tantalising sharpness of HD transcends the digital space of the TV screens, spilling out into the physicality of the gallery environment. The unclad bodies of the dexterous youthful dancers perfectly imitate the implausible liquescence of the animation and converge in and out of precise synchronicity with salacious choreography from past works, in a perpetual loop of mimicry and simulation, referent and referral.

While Peake’s performers are often described as ‘sexual objects’, his work steadfastly refuses to fall into gender or sexual binary norms. The choreography of lascivious actions is enacted by male and female performers alike – groin thrusting, hip gyrating, cock jerking – excavating the ingrained social and cultural complexities of viewing and presenting the human body. Lacking recognition or awareness of the audience around them, the dancers become a modern day version of erotic 19th-century nude tableaux vivant, but, like the insipid images of a glossy magazine, there is a shallowness to their presence, as if they had stepped directly out of an American Apparel advertisement. Lacking intimacy, they act out prescribed steps of commercialised sexualisation. In this realisation, the sexed-up-syntax becomes impotent, rendering the performers sexless; rather than lifeless objects of desire, they are the galvanised embodiment of critique.